At Kyoritsu Narashinodai Hospital, in Narashino City, Chiba Prefecture, PFProp is used in the exercise class for women after giving birth. The instructor is Ms. Yumi Okubo. Their class meets twice a month at the hospital.
After giving birth, women often report concerns about urinary incontinence and stiff shoulders while nursing their children. Also, new mothers complain about the difficulty in strenuous exercise and pain in the coccyx even two years after giving birth. 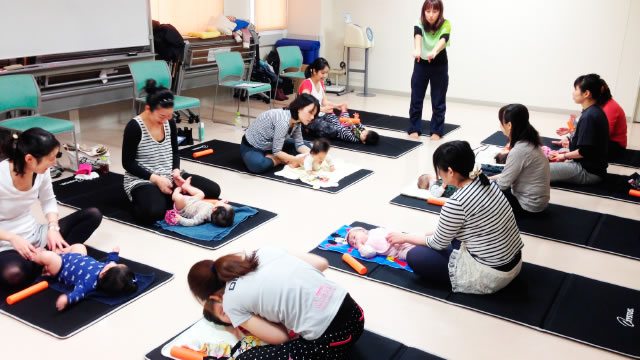 This is where PFProp comes in. The product has been used for a variety of purposes, such as strengthening the pelvic floor, improving posture, releiving pain, basic exercises, and self-massage. As shown here, PFProp is becoming more widely used in hospitals across Japan.
Participants commented:
“I had lower back pain after giving birth to my first child; however, I seem to be better after the second child, and I think the product is effective.”
“I can feel the changes in posture before and after using PFProp, and I hope to continue using it in the future.”