PFProp is used as a tool for training the pelvic floor muscles. Stronger pelvic floor muscles help to prevent and improve issues of urinary incontinence.
The pelvic floor muscles should be evaluated directly when using the PFProp. However, such an evaluation is difficult due to issues of privacy. For this reason, the impact of PFProp on the body was verified from the perspective of the thickness of the lateral abdominal muscles, which contract with the movement of the pelvic floor muscles, and the strength of the hip adductor muscles, which are joined to the pelvic floor muscles via the fascia.
The study was conducted as follows: sixty-two healthy university students were divided into three random groups. One group had no exercise training at all. Another group had training without PFProp, and a third group trained using PFProp. For all three groups, the lateral abdominal muscles were measured with an ultrasonic device on the first day of training, and again after three weeks of training. The hip adductor muscle strength was measured with an abduction/adduction meter in the same fashion.
As shown in the graph, after three weeks of using PFProp, the effects on the lateral abdominal muscles were inconclusive. However, the training promoted muscle activity in the hip adductor muscles. 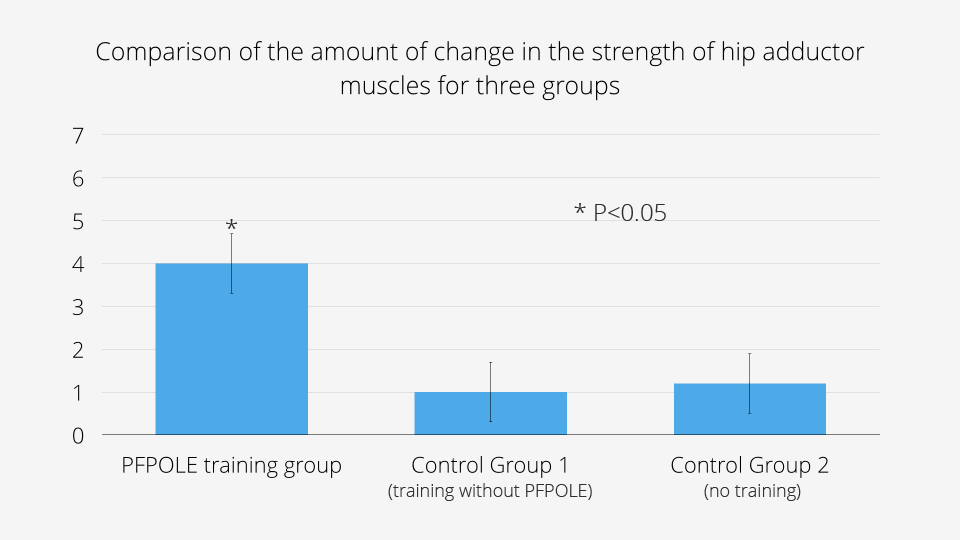